Holiday Markets Around The World

You’ve probably stopped in at a local craft fair or two in your hometown during the holiday season.  But in Europe the holiday markets are seriously next level!  Dating back over 700 years and originating in Germany, the tradition of holiday markets known as “Christkindlmarkt” or “Weihnachtsmarkt” is a sight to behold.  Historic old town squares are crammed with rows and rows of rustic wooden booths, twinkly lights, garlands of pine, music, performances, sometimes-quirky local customs, and vendors selling an amazing array of traditional foods and gifts.

Visiting Europe’s infamous and expansive holiday markets is a Yuletide tradition not to be missed!  Let’s take a little virtual tasting tour of some of the most famous holiday markets:

Strasbourg hosts nearly a dozen Christmas markets, but Christkindelsmärik is the largest. Hundreds of vendors sell traditional holiday gifts and handmade items in the area around Strasbourg Cathedral. First held in 1570, the market is one of Europe’s oldest. Thanks to Strasboug’s close proximity to Germany and Switzerland, this is a great place to try dishes from all three countries as well as seasonal treats such as spaetzle and grittibaenz, (spiced bread shaped like little men!)  It’s also a fantastic spot to sample Alsatian wine, sweets, and pastries.

The Austrian capital’s first Christmas Market is thought to have been held in 1298!  One popular Viennese Christmas Market takes place in front of City Hall (Rathaus) boasting 151 stalls and even a skating rink.  Another popular market is in front of Vienna’s Schönbrunn Palace with about 70 exhibitors. Both markets feature advent wreaths, tin toys, and handmade Christmas decorations as well as some delicious local culinary highlights. Stall after stall selling  sausages, crepes, apple-centric desserts, raclette cheese served with bread, and pan-fried potatoes lure shoppers while hot chocolate, Austrian wines, and Glühwein are popular to sip.

The delicious scent of mulled wine, cinnamon, roasted chestnuts and traditional honey biscuits fill this extensive market made up of quaint cottages and over 100 wooden stalls. The area is  entirely transformed into a winter wonderland!  You can also sample traditional Hungarian dishes such as pork knuckle , stuffed cabbage and a local classic called lángos, a deep-fried dough brushed with garlic and slathered with sour cream and grated cheese.

Christkindlesmarkt in the center square of Nuremberg’s old town is world-famous. Dating back to the mid-16th century, hundreds of wooden houses are decorated in red and white cloth giving it’s nickname “Little Town from Wood and Cloth”  The most attractive stalls even win awards!  About two million people visit each year, shopping for everything from traditional ornaments, tree angels, candles, and unique to Nuremberg “plum people”. These handheld figures made from prunes, nuts, dried fruit are dressed in tiny costumes and popular with all. Another Nuremberg quirk? Most German markets offer bratwurst, but in Nuremberg, you get three skinny brats in your bun, known as Drei Im Weggla. Other delicacies include fruit loaves, gingerbread, and mugs of mulled wine.

The famous Dresden Striezelmarkt has over 100 events including intricate crafts, the typical shopping, plus a baking spectacular! Local bakers prepare a gigantic stollen (or traditional German fruitcake) and parade it through the streets to the market before ceremoniously handing out slices to visitors.  There’s also an endless array of seasonal goodies such as cakes, glazed apples and sugared dough balls.

The Estonian capital’s annual Christmas market takes place in Town Hall Square and is famous for its Christmas Tree which has been a tradition since 1441…and is thought to be one of the first to be displayed in Europe!  This market is also known for its one-of-a-kind buckwheat pillows, wooden bowls, felted wool hats, and locally made honey.  Happy visitors stroll while sipping mugs of hot mulled wine and sampling an array of blood sausages, sauerkraut, and marzipan sweets.

Located in Skansen, an open-air museum on the island of Djurgarden in the heart of Stockholm, this Christmas market is about as traditional as it gets!  It’s bustling with little red stalls dotted around Stortorget square selling Swedish handicrafts, candles, angel chimes, traditional sausages, spices, smoked turkey, eel, and dry-cured reindeer and elk-meat, as well as Nordic glögg, their own version of mulled wine served with raisins and slivered almonds. For those with a sweet tooth, be sure to try the pepparkakor, a traditional ginger biscuit.

Held on the grounds of the historic Tivoli Gardens amusement park, Copenhagen’s Christmas market is a stunning wonderland of sight and sound. You can shop for souvenirs, handmade goods, and local delights like aebleskiver; or Danish pancakes which resemble donuts. Try them paired with gløgg, Scandinavia’s answer to German Glühwein.  This market also boasts three different light shows and an annual St. Lucia’s Day celebration with 100 girls passing through the gardens carrying candles and singing to commemorate the saints day.

The Czech Republic hosts a number of Christmas markets across the country, but the most popular are held at Prague’s Old Town Square and Wenceslas Square. Along with the usual souvenirs and holiday decorations you can sample some of the country’s most infamous winter delights such as steamed dumplings filled with smoked pork, garlic-and-cheese flatbread, klobása (Czech sausage) and every shape and size of gingerbread you can imagine. To drink try their local honey wine, thick hot chocolate, or vast array of Czech beers.

Barcelona’s largest holiday market features traditional Christmas trees, sweets, and nativity scenes as well as  handmade crafts and an entire area dedicated to musical instruments. Another uniquely quirky part of a Barcelona Christmas? The “caganer” a small squatting figure with pants around the ankles!  Believe it or not, these irreverent potty-people have been a beloved part of Catalan nativity scenes for centuries.

No matter what; beware the Krampen!

Across the Alp region, the festive and relaxed atmosphere of holiday markets can be rudely interrupted by a scary sight – the mythical “Krampus”.  Half-goat, half-demon and sent to punish children who have been naughty. Krampus processions date back many centuries and are a popular and scary part of Advent celebrations. (Think of him as the opposite of Santa Claus!)  Participants wear heavy costumes made from animal skins; jangling bells; and terrifyingly elaborate masks, many over a century old!

Hungry for more?  See our piece on Holiday Traditions Around the World or try our Scandinavian inspired Savory Dutch Pancake with Ham & Edam, a classic French Tartiflette with Raclette or put together your own festive Holiday-Inspired Cheeseboard. 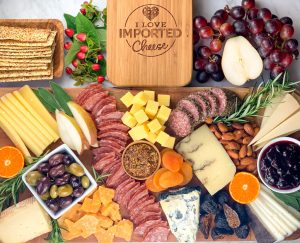 Happy Holidays from all of us at I Love Imported Cheese!