All About PDO Cheeses

Ever wonder what all those European food product acronyms signify? They’re designed so you can be sure you’re buying a product of quality and authenticity.  PDO stands for Protected Designation of Origin, a status awarded to a food or beverage made in a specific way, within a particular area. Whether it’s French Champagne or West Country Farmhouse Cheddar –

Since protected designation of origin is an English term, the same term translates differently in other languages. For example, in France the PDO equivalent is appellation d’origine protégée, or AOP; in Italy it is denominazione di origine protetta, or DOP; and in Spain it is denominación de origen protegida, also DOP

The EU has given PDO status to 180 cheeses, from Allgäuer Bergkäse to West Country Farmhouse Cheddar with Italy and France each boasting over 45 PDO cheeses each!

For a cheese to qualify for PDO, it must meet specific criteria such as where it is made (the appellation), how it is made (the recipe), the source of the milk, and how and where the cheese is aged (the affinage). Here are some of the most popular PDO cheeses you know and love!

Parmigiano Reggiano is one of the top-selling PDO products in the world with 3.6 million wheels produced annually using about 18% of all the milk produced in Italy. To wear the designation “Parmigiano Reggiano PDO,” the cheese has to be produced in the provinces of Parma, Reggio Emilia, Modena, Mantua to the right of the Po river, and Bologna to the left of the Reno River using milk from cows fed only hay and grass.  To give you a sense of the precision that goes into Parmesan Reggiano; after aging 12 months, the Consorzio Parmigiano Reggiano inspects every wheel. The cheese is tested by a master grader who taps each wheel to identify undesirable cracks and voids within the wheel. Wheels that pass the test are then heat-branded on the rind with the Consorzio’s logo while rejected wheels are labeled differently.

Try it in our Baked Italian Four Cheese Dip along with 3 other popular Italian cheeses Fontina, Provolone, and Mascarpone. 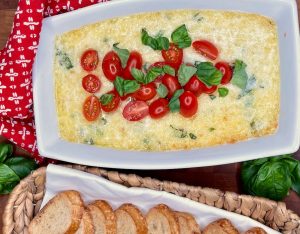 This iconic, soft-rind cheese is well known throughout the world.  Camembert is often poorly imitated, but experts know that the true PDO Camembert only comes from Normandie made with local cow’s milk. According to legend, Camembert was created by Marie Harel during the French Revolution in 1791 in a village near Camembert in the Pays d’Auge region. Harel agreed to hide a priest who sympathized with the rebellion at her farm. In exchange, he taught her how to make the cheese. True Camembert cheese has a white, bloomy, slightly downy rind with a rich creamy texture and a bold woody and earthy flavor.

Make imported Camembert the star of the party with our Grilled Camembert with Cherries and Thyme. 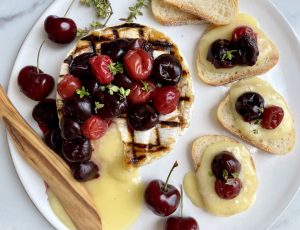 Served everywhere throughout Spain and enjoyed on cheese boards worldwide, imported PDO Manchego cheese from Spain is made in the La Mancha region  from the milk of sheep of the Manchega breed. It is aged between 60 days and 2 years. Manchego has a firm and compact consistency and a buttery texture, often containing small, unevenly distributed air pockets. It has a distinctive flavor, well developed but not too strong, creamy and nutty with a slight tart-sharp edge.

Not just for cheeseboards, imported Manchego is delicious in recipes too! Enjoy a taste of Spanish flavors with our Manchego Stuffed Flank Steak with Romesco Sauce.

Gouda from the Netherlands

One of the most popular cheeses worldwide; the first mention of Gouda cheese dates from 1284, making it one of the oldest recorded cheeses in the world still made today!  Some 300 Dutch farmers still produce boerenkaas (“farmer’s cheese”) which is a protected form of Gouda made in the traditional manner, using unpasteurized milk.  The cheese is named after the master of Gouda, not because it was produced in or around that city, but because it was traded there!  In the Middle Ages, Dutch cities could obtain certain feudal rights which gave them a monopoly on certain goods. Within the County of Holland, Gouda acquired market rights on cheese, the sole right to have a market in which the county’s farmers could sell their cheese. This cow’s milk cheese varies in flavor from creamy and meltable when young to deeply colored and rich when aged with a fragrant scotch-whiskey type of aroma, a unique crumbly, crunchy texture and lightly sweet, nutty taste.

Try it in a classic Gouda Dutch Baby! 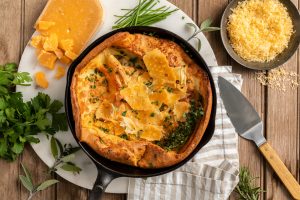 Feta (Greek: φέτα, féta) is a brined white cheese made from sheep’s milk or from a mixture of sheep and goat’s milk. The ancient Greeks called the product that emanated from the coagulation of milk “cheese”. The name Feta, literally meaning “slice,” originated in the 17th century, and probably refers to the practice of slicing up cheese to be placed into barrels—a tradition still practiced today.  Its flavor is tangy and salty, ranging from mild to sharp. Feta is used as a table cheese, in salads such as Greek salad, and in pastries, notably the phyllo-based Greek dishes spanakopita “spinach pie”.

Make a mini version of a Greek classic with these Feta-packed Spanakopita Bites.

Single Gloucester from the United Kingdom

Give Gloucester cheese a try  in our pub staple Welsh Rarebit! 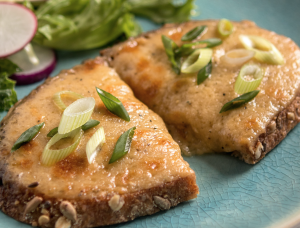