The world’s most popular variety, Cheddar cheese has a long and storied history!

Cheddar has been made since at least the 12th century and is believed to date as far back as the Roman invasion of England. As it’s known today, cheddar cheese originated and earned its name in the village of Cheddar in Somerset in the south west region of England where caves in Cheddar Gorge provided the perfect humidity and temperature to age the cheese.

Cheddar was favored by the royals from Henry II who is rumored to have purchased 10,000lbs of the delicacy. By the time King Charles I ruled in the 1600’s demand outweighed supply so much you could only get cheddar at the royal court and if you paid for it! In 1840 Queen Victoria even received a giant 1000lb wheel of cheddar for a wedding gift (to note: an average wheel of cheddar weighs just 50-70lbs).

In the 19th century a Somerset dairyman named Joseph Harding introduced new techniques to cheesemaking including a revolving curd cutter that saved time and effort and somewhat standardized the process – earning him the nickname “the father of cheddar cheese”.

Prior to WWI there were more than 3,500 cheese producers in Britain with fewer than 100 remaining after WWII. Due to war rationing and for almost 10 years after most milk in Britain was designated to make a single kind of cheese nicknamed “Government Cheddar” which nearly knocked out other cheesemaking. Thankfully no such shortages or rationing exist today and fine imported cheddars are made in many places throughout the world most notably Ireland and Australia where it’s often smoked or flavored with ale, whiskey, or wine.

Always made from cow’s milk. Cheddar is a hard and natural cheese that has a slightly crumbly texture if cured and smooth and creamy when young. Flavors range from mild to sharp, with the difference coming from the cheese cultures used and the aging of the cheese. It is often described as having a taste of hazelnuts crossed with brown butter. As with many cheeses, cheddar gets a sharper taste as it matures, which can vary from 2 months for a creamy texture to up to 24 months for a crumbly result. Aged cheddars are often unpasteurized to encourage salt crystals to form.   The orange hue seen in some Cheddars derives from the addition of ground annatto seeds. Annatto, the flavorless fruit from achiote trees found in South America, holds no significant taste or aroma, and has been used in cheeses for generations.

Loaves of curd are stacked on top of each other causing excess whey to drain off. The layering is part of what causes the cheese to develop its characteristic flavor and texture.

Cheddar is a welcome addition to any cheeseboard and is delicious with fruits such as apple, pear, and grapes. It also pairs exceptionally well with ales, Cabernet Sauvignon, and even a fine whiskey such as an aged Scotch or bourbon.

Cheddar is one of the most popular cheeses for snacking but also for cooking!   Enjoy it in comfort food macaroni and cheese or our fun recipe for Mac and Cheese Cups, in Mexican dishes such as our White Cheddar Chicken Chili Verde or to top burgers as in our hearty Sharp Cheddar Stout Burgers. 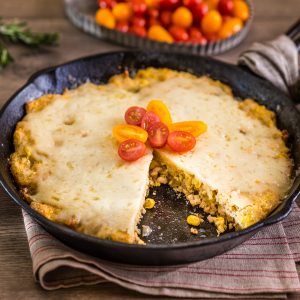 Curious about other types of cheddar now? Check out our post all about Smoked Sharp Cheddar for more fun facts!